Bias - Prejudice in favor of or against one thing, person, or group compared with another, usually in a way considered to be unfair.

Color-evasiveness/color-blindness - Denial of racial differences by emphasizing similarities. Though well-intentioned, it implies race does not matter and leads to inequity.

Critical Race Theory - Critical Race Theory (CRT) is a phrase that is frequently mentioned in the media and public conversations. CRT might have a specific meaning to one person, while others might believe it is entirely different. But the most basic purpose of Critical Race Theory, which originated in the 1970s, was an analytical tool for law students to examine the impact of historical and present-day racism on the legal system and public policies. Currently, CRT is primarily used by higher education in the study of law, psychology, and sociology.

Culture – The totality of ideas, beliefs, values, knowledge, language, and way of life of a group of people who share a certain historical background. Manifestations of culture includes art, laws, institutions, morals and customs. Everything you believe and everything you do that enables you to identify with people who are like you and that distinguishes you from people who differ from you. Both individuals and organizations are defined by their cultures.

Cultural Competence – The alignment of personal values and behaviors and the school policies and procedures in a manner that is inclusive of all cultures and that enables healthy and productive interactions among individuals. Viewing one's personal and organizational work through a lens of responsibility for fostering an environment that is inclusive of cultures that are different from that of the individual.

Cultural Identity - Encompasses the totality of the students’ identity (i.e. race, ethnicity, age, gender, sexual orientation, disability, religion, socioeconomic background) which are recognized as student strengths and opportunities to grow and learn from.

Cultural Proficiency – Making the commitment to lifelong learning for the purpose of being increasingly effective in serving the educational needs of cultural groups; holding a vision for the future and committing to culturally competency assessments that serve as benchmarks on the road to student success.

Culturally Responsive - Sustaining Education (CR-S) - An approach that emphasizes using the cultural knowledge, prior experiences, frames of reference, and performance styles to make learning encounters more relevant to and effective for all students. Culturally responsive-sustaining (CR-S) education is grounded in a cultural view of learning and human development in which multiple expressions of diversity (e.g., race/ethnicity, social class, gender, language, sexual orientation, nationality, religion, ability/disability) are recognized and regarded as assets for teaching and learning.

Culturally Responsive Teaching - An approach that emphasizes using the cultural knowledge, prior experiences, frames of reference, and performance styles to make learning encounters more relevant to and effective for all students.

Disproportionality - Used when one group’s population size is too large or too small in comparison with another group. Frequently used to indicate that a policy or action is impacting one group more or less than another.

Educational Equity – A measure of achievement, fairness, and opportunity in education; practices that provide all students with the individual support they need to reach and exceed a common standard.

Equality - The state of being equal, especially in status, rights, and opportunities.

Equity - The guarantee of fair treatment, access, opportunity, and advancement for all while striving to identify and eliminate barriers that have prevented the full participation of all groups. The concept of equity is synonymous with fairness and justice. To be achieved and sustained, equity needs to be thought of as a structural and systemic concept, and not as idealistic. Equity is a robust system and dynamic process that reinforces and replicates equitable ideas, power, resources, strategies, conditions, habits, and outcomes. 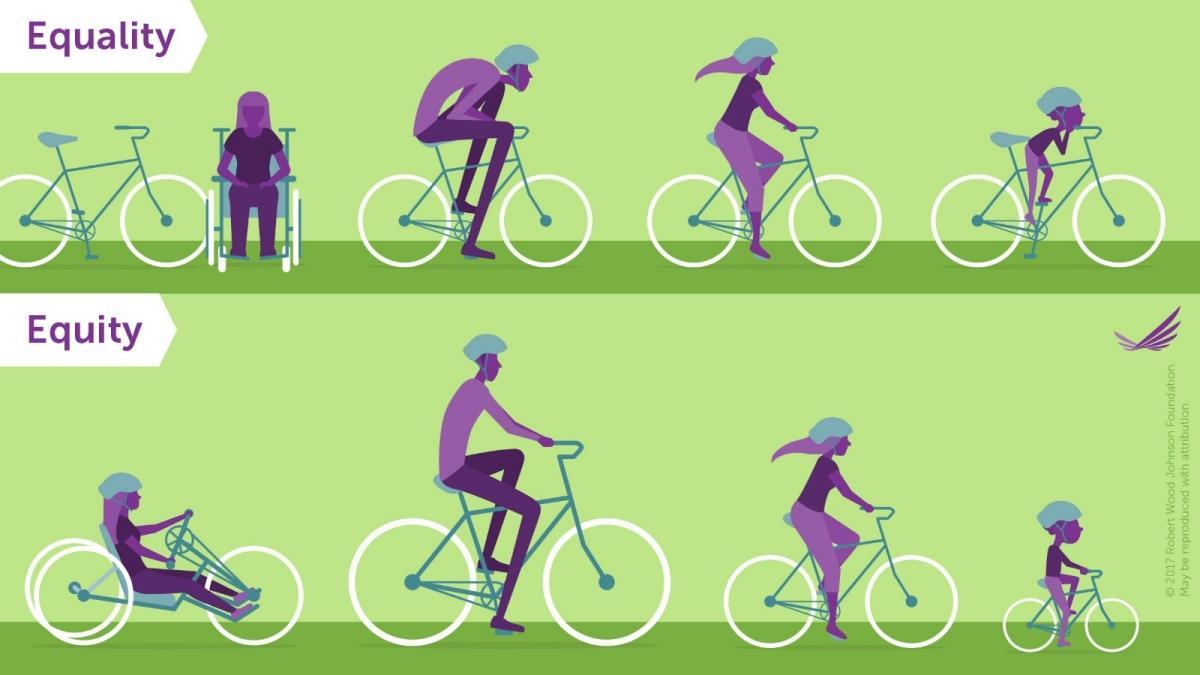 Gender Pronouns - A gender-neutral or gender-inclusive pronoun is a pronoun that does not associate a gender with the individual who is being discussed.

Giftedness - Students with gifts and talents who perform, or have the capability to perform at higher levels compared to others of the same age, experience and environment in one or more domains. They require modifications to their educational experience to realize their potential. Students with giftedness come from all racial, ethnic and cultural populations, as well as economic backgrounds.

Historically Underrepresented Groups - Refers to groups who have been denied access and/or suffered effects of systematic racism and/or discrimination.

Inequity - Situations, actions, or instances that result in a lack of fairness or justice.

Inclusion - Authentically bringing traditionally excluded individuals and/or groups into processes, activities, and decision/ policy making in a way that ensures equal access to opportunities and resources.

Marginalized Groups - Examples of marginalized populations include, but are not limited to, groups excluded due to race, gender identity, sexual orientation, age, physical ability, language, and/or immigration status.

Race - A socially constructed category of people, grouped on the basis of physical characteristics, including skin color, hair, and facial features.

Racism - A belief that race is the primary determinant of human traits and capacities and that racial differences produce an inherent superiority of a particular race.

Unconscious Bias - Social stereotypes about certain groups of people that individuals form outside their own conscious awareness.